Teaching handwriting in kindergarten can be simplified with these quick tips. Here's what you need to know when you're teaching five and six-year-olds how to write. 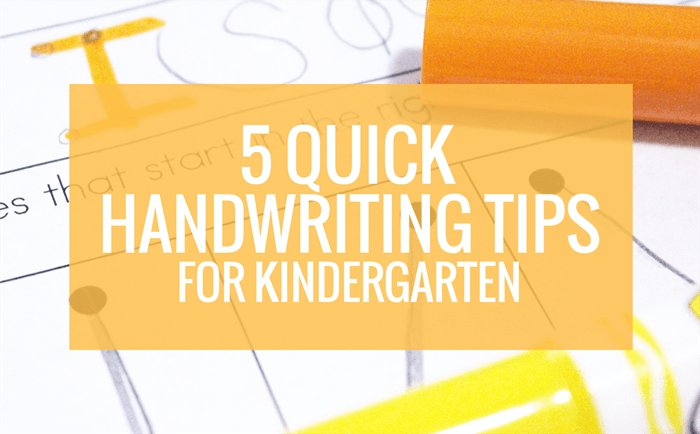 These tips will work with whatever way you teach students to write in kindergarten. However, I believe that they will work extremely well when combined with this simple approach to breaking down handwriting.

It's all about making handwriting meaningful and how to work on handwriting with students one-on-one in ways that won't make you want to pull your hair out.

Formation from the start is easiest

I have found that teaching the formation of each letter as we introduce the letter is the easiest way to teach handwriting.

As a result, I believe in teaching a letter as a whole: how it looks, sounds and how to make it...

My general teaching method was:

And that's about it.

Doing it this way made handwriting more meaningful to each student. They worked on what they needed - nothing else.

Now - let's get to the tips for when you're working with students on what they need.

First off - I want to reinforce that I have expectations that there is a certain way to form the letters. The easiest way to do this is to use student names.

How many times do students write their names on things during a day? A bunch, right?

Well - that makes tons of opportunities to zero in on a child or two each time to quickly share your expectation and support them in learning to handwrite letters.

Keep in mind... they are going to write their name over and over {and over and over} so I'd better get them early before they've created the wrong muscle memory!

And those letters in their name are more important to them than any others in the alphabet.

I don't make a child write his/her entire name correctly when we start out.

I simply pick ONE letter in their name that I want them to get down pat.

And usually, it's the 'lowercase a' that I pick for many of them. (If they can't write any recognizable letters at the beginning of the school year then I start with the first letter of their name so that they can at least feel like they "wrote their name") 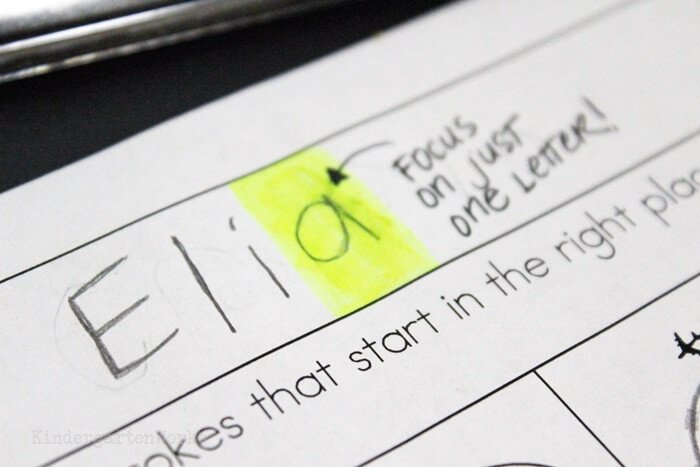 I use hand over hand to help them get the feel for the fluid motion while they are writing their name. I try to sing a chant about how we're forming the letter strokes so they can later use that song as a tool when trying on their own. I do this a few times - if needed.

If they're getting it... or not

Now, either they will start to do the correct formation on their own... or they will need more. Here's what I'd do for each instance:

If they are totally getting it right away (and have good muscle memory), then I pick out 2-3 more letters in their name for them to work on simultaneously (and reinforce my positive expectation every time I happen to notice them putting their name on something).

These kiddos are often the quickest formation learners and usually pick up most letters by November.

Middle of the road

If they are getting it within 4-5 times of hand over hand, then I like to offer an incentive to break away from needing my help. I ask them to show me the next time they write their name - how they can do it by themselves - the way we've practiced together.

If they can show me that they can do it on their own, they earn a smelly spot. I'm sure to give high praise, follow through with the reward and then I immediately share how I expect them to do it that way every time.

Next time I'm circling {sometimes swooping, sometimes darting} I check that letter, reinforce their efforts and pick one new letter (usually a letter using the same formation that they can repeat.... or one that is atrocious).

If they aren't getting it at all... well then I make a special note {but by now I've usually made, ahem, a few special notes about this kiddo} but often it's a boy who struggles with fine motor skills and hasn't developed muscle memory in creating patterned movements with his fingers.

It's okay - they don't stay clueless about forming letters for too long. So - we keep it simple.

Just stick with one letter... Offer an incentive and build in more support when you can.

This one simple tweak to teaching handwriting will make you just about want to throw out your curriculum handwriting books. Just about (or if you're me -- then you do it!)

Teach students how to identify where a letter starts -- with a dot.

Create starting dots for each letter stroke. It's the easiest way to break down how letters are formed and to teach fluid letter formation.

Now, some letters have more than one stroke. Students need to lift their pencil off the paper. That's okay - now we use a lighter colored dot to show which stroke comes next. 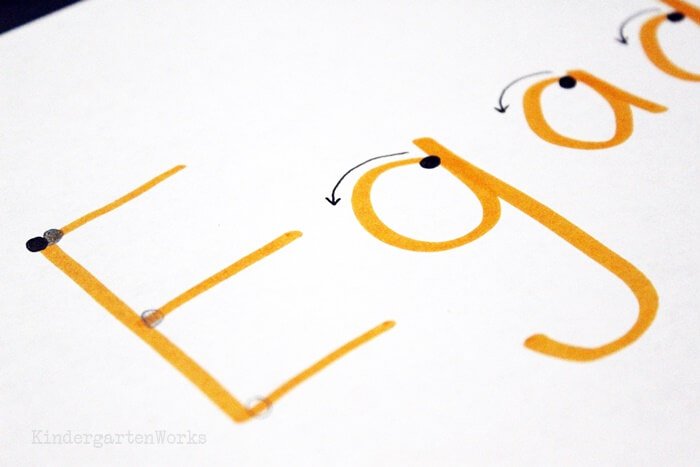 Dots go from black to sequentially lighter shades of gray to white (in the case of uppercase E).

If they regress later in the school year, I have these kiddos draw a black dot later on as their starting place reminder which stops them from using any old formation and gets them thinking about proper formation.

I even use starting dots in our playdough literacy center. I'm not kidding - they reinforce exactly what I want students to know about how to form letters.

They work really well to support our handwriting efforts.

My students all had one or two markers in their pencil boxes. (You could easily keep a marker in your pocket) Whenever someone was having difficulty with a specific letter I could easily grab a lighter colored marker and draw the letter on their paper for them while chanting a little repetitive formation chant.

Essentially I'm highlighting a path for the student to write on. Don't use a crayon to highlight a path because it's too bumpy to glide over with a pencil.

Then, I will add a dark, circle dot (or ask them to do it) with a pencil to identify the starting place of the letter.

Then they trace on top of the marker path starting at the dot. 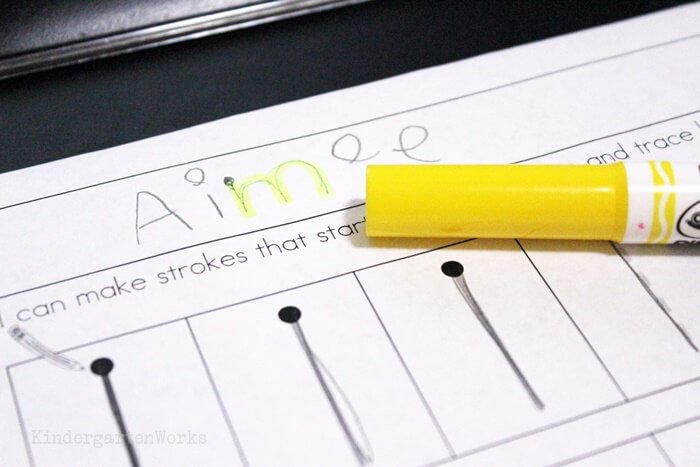 When you create a highlighted path for them to trace on top of - you're letting their work shine.

Parents can see your mark, though, and it helps call attention to what their student is currently working on. {wink}

Just like I picked out one letter in their name - I personalize the work my students do in handwriting.

An easy way to do this is to create a personalized piece of homework for them.

{They are never super cute - just functional and whipped up in less than five minutes} I use my handwriting fonts to make them simple and print out as needed. My Starting Dots Handwriting Font and Outline Font are great for this.

But, you could easily print off these name homework sheets which are much cuter than mine ever were) or laminate them for in-class work too.

Once they are past names, it all comes down to working on what they need. So, in small groups, I assess and track what letters students need to focus on. There is magic and motivation when they see their own growth.

If they don't need to master the letter M - then they don't practice that outside of everyday normal use. No letter Mm worksheet for you just because everyone is doing it! That's silly.

I didn't use my handwriting curriculum books. Or on the extremely rare occasion did they ever see the light of day.

Why didn't we do them? Well, because they are entirely too time-consuming.

The way they work goes against what I'm trying to accomplish.

If you've read other stuff by me you'll know I'm not usually a fan of curriculum handed down to me and it usually hides in my closet all year long. *truth*

The handwriting curriculum book gives "ample practice" but if students aren't doing each letter correctly (while not being watched because the teacher is circulating and can't watch everyone) then what did they get out of doing it 25 times per page?

If they did it incorrectly, how frustrating is it to do it all over again?

If they get it, can they retain it when all of a sudden other formations are thrown in {like in real life as in the next letter in any word!}? 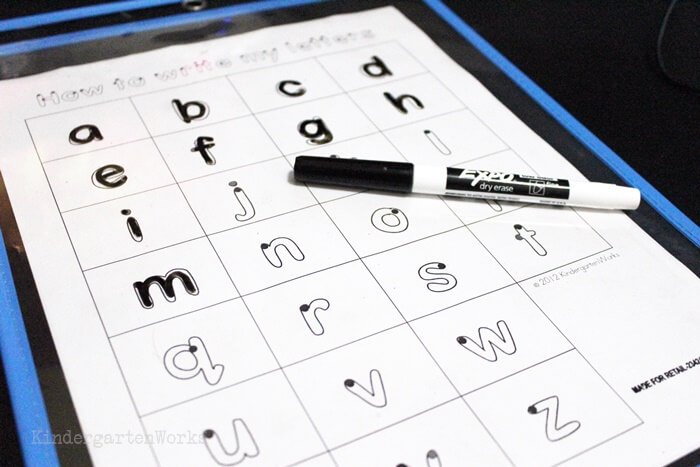 In place of traditional curriculum - I like rainbow tracing, skywriting, workmats with dry erase markers and playdough to get ample practice and keep them on their toes.

These tips should work whether you teach with curriculum {wink} or teach Zaner-Bloser or D'Nealian.

Let's wrap it up

Remember: it's all about making handwriting meaningful and easy for you to build right into what you're already doing every day.

Want me to break it down and show you how I teach handwriting? 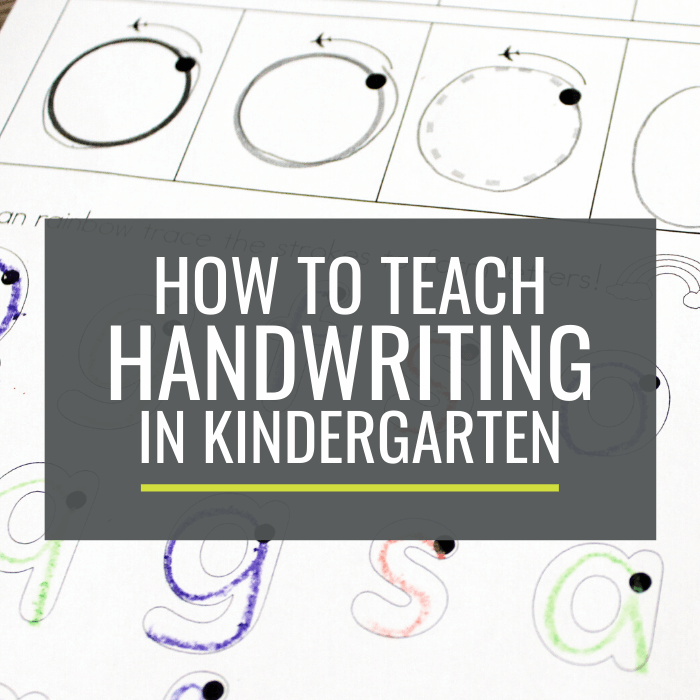 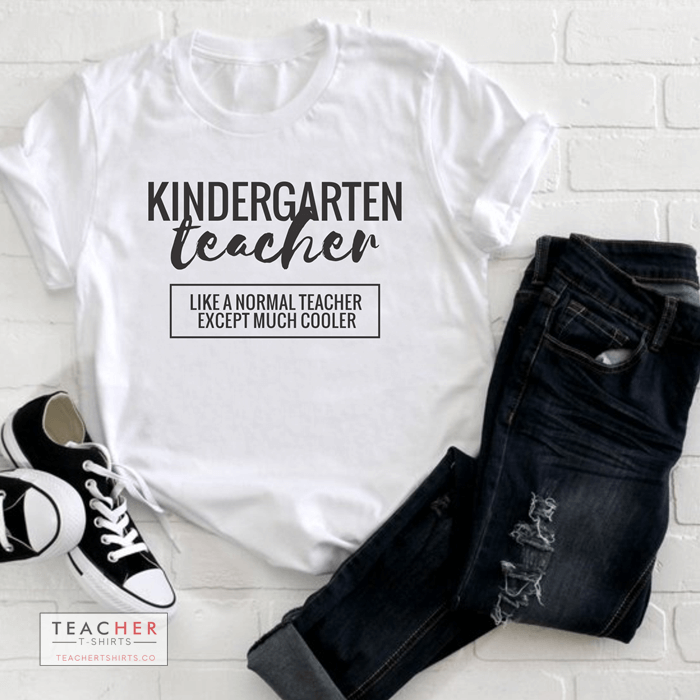